The first few years our newsletter was called the “Bluegrass Rumble” and was then shortened to “Rumble.”  As a piece of trivia, the original name that was proposed was “Burgoo” in honor of our Kentucky traditional stew, but this was changed before the first edition.  The name “Bluegrass Rumble” was chosen as it was a shout out to the Porsche owners in Central and Eastern Kentucky who came together and are now known as the Bluegrass Region PCA.

In April 2008, the board voted that starting May 2008 the Rumble will not be printed and mailed. It will only be distributed in digital format. All members had the option of having it automatically sent to their email address.  It was also available on the club’s website.

As you view the links below for the archive of our newsletters, you will notice that some our monthly newsletters are missing.  If you have any of the missing newsletters please contact the Bluegrass Region PCA Historian.  Thank You! 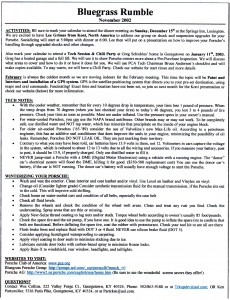